David In the News

Georgia’s hair stylists, tattoo artists and massage therapists are among the people who can go back to work Friday following a new executive order from Georgia Gov. Brian Kemp that eases business constraints designed to stem the spread of the novel coronavirus.

Gyms, restaurants and other indoor businesses that were closed can open under Kemp’s March shelter-in-place order, which he reset April 8. Restaurant dining rooms and theaters can seat customers next Monday.

The order to lift some restrictions is a Kemp concession to Georgia businesses that have burned cash for weeks, even as public health experts urge him to take time to collect more testing data before easing limits on social interaction.

“I don’t give a damn about politics right now,” Kemp said at a Monday press conference. “We’re talking about someone who has put their whole life into building a business that has people that they love and work with every single day working in many of these places that are at home going broke, worried about whether they can feed their children, make the mortgage payment.”

Under the order, businesses are subject to a laundry list of requirements, including screening and evaluating workers for signs of illness, prohibiting handshakes, providing disinfectant and maintaining social distancing.

Dentists, orthodontists and optometrists can open their doors when they see fit. The governor also said more hospitals will be cleared to perform delayed elective surgeries after patients with COVID-19 claimed a larger share of health care resources in recent weeks.

Worship services can be held in person, as long as religious leaders adhere to state safety guidelines.

Georgia’s shelter-in-place order is set to expire on April 30. Kemp said older Georgians and medically fragile people should continue to shelter in place through May 13.

Georgia still falls short of President Donald Trump’s guidelines that the country’s governors use a phased-in approach to reopen for business. The Monday announcement is based on new modeling that predicts a two-week decline in new COVID-19 cases is likely, the benchmark in Trump’s plan.

Critics say the state is moving too quickly by projecting recent positive trends will continue.

“I think there’s a lot of hope and wishful thinking both in predicting what the next couple weeks are going to look like in terms of the number of cases and severity of cases in our state, and in terms of our ability to operationalize the plan … in terms of things we need to have in place around testing and PPE and responding to potential new cases,” said Georgia State University public health professor Harry Heiman.

The lack of testing in the state makes it hard to know where the disease is spreading, Heiman said. The state also needs more health care infrastructure to rapidly respond to and contain outbreaks. Kemp’s administration has a good idea of the resources that need to be in place before the state opens up, but they’re not ready yet, he said.

The plan comes as Kemp is taking heat from business owners who want to get back to work, said Kennesaw State University’s director of the School of Government and International Affairs, Kerwin Swint.

“It’s definitely a balancing act, and he has to do what he thinks is right,” Swint said. “He has to listen to his scientific advisors, but he can’t ignore the business aspect either, and I think there are forces on both sides of that issue that would like to be all in on one or the other, and you can’t really do that.” 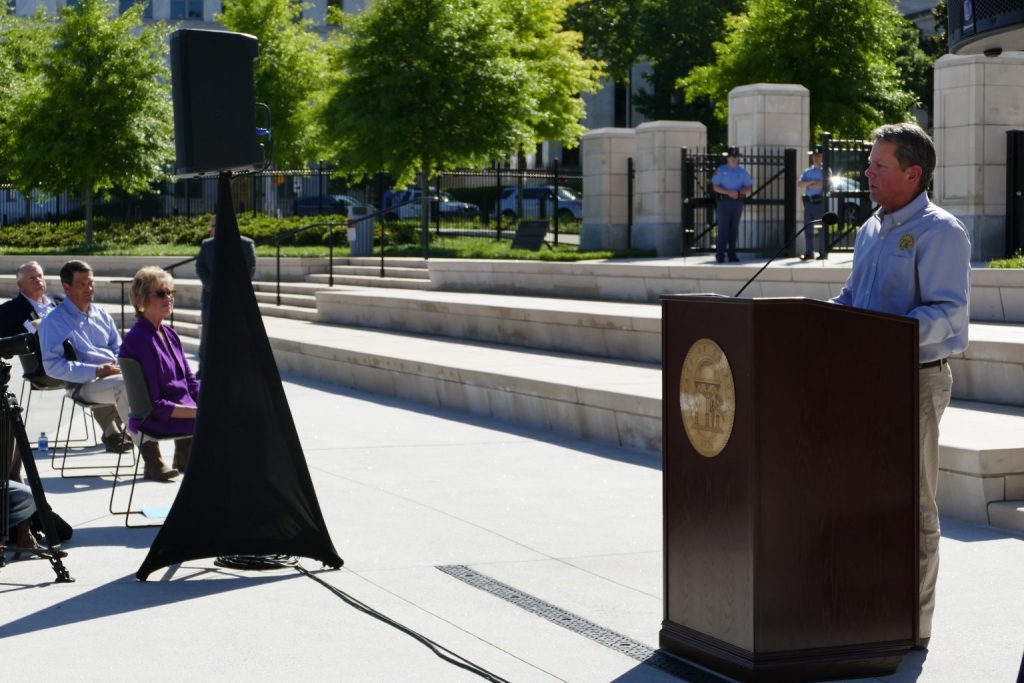 As of Monday evening, 775 people in Georgia have died from COVID-19 disease and 19,399 people in the state have had confirmed cases, according to the Georgia Department of Public Health. Kemp cited an apparent decline in new cases and in ER visits as evidence the disease’s peak is in the past.

Georgia State’s Heiman said more testing and tracing of interactions of people who test positive is needed to know if the spread of COVID-19 is in decline.

“For example, a lot of the testing and case identification and contact tracing is through Augusta Health and through a new app they’re developing, and by their report, they’ve still finalizing and customizing the app,” he said.

“I’m just concerned that we’re in such a hurry to open things back up, that we’re willing to lean into plans for the things we need to have in place, rather than actually having them in place,” he added. “And I hope that we’re not premature, and I hope it doesn’t come back to bite us.”

On the other side of the equation, about 1 million Georgians filed for unemployment benefits the past four weeks, more than filed claims during the worst full year of the Great Recession.

Already, the COVID-19 crisis threatens to blow a big hole in the state’s $28.1 billion budget. Revenues could fall at least $1 billion in the remaining three months of this fiscal year, according to a report released Monday by the Georgia Budget and Policy Institute.

A deeper budget shortfall of at least $3 billion could await next year’s spending plan, which would take effect July 1, according to the report. Ralston said Monday legislative leaders are in early discussions about how to approve next year’s budget, a critical task left undone when lawmakers suspended the 2020 session a month ago.

State Rep. David Clark, a Buford Republican, joined the chorus calling for an immediate reopening of the state’s businesses in a Facebook post over the weekend.

“In speaking with many small business owners in State House District 98 and the state over the past weeks, they are all expressing the hurt that many of us cannot even fathom,” he wrote. “Many are going to lose everything. It’s time to realize the COVID-19 numbers originally forecast aren’t matching the actual data that is being reported daily. It’s time we stop listening to the media who is purposefully inciting fear.”

One group called #ReopenGeorgia plans to host an “Operation Gridlock” protest at the Gold Dome Friday. Similar protests are making headlines in other states. Organizers said Monday night they will decide Tuesday whether to go on with the event.

Some state Democrats said Kemp’s order to lift restrictions values commerce over the lives of Georgians. His revised order continues to override any attempts at stricter local laws.

“(Kemp’s) decision falls somewhere between risky and reckless,” tweeted House Minority Leader Bob Trammell. “We lack adequate testing to know where on the continuum it falls. A rushed decision that’s more wish than plan and that may ultimately harm economic recovery while also jeopardizing our progress against the spread.”

“There’s no way I’m getting a haircut, or dining at a restaurant, even though I really want to,” the Atlanta Democrat tweeted. “This is not good. This is going to get more Georgians killed.”